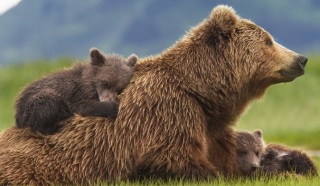 Who doesn’t love bears? Beautiful little bear cubs to the magestic and beautiful Polar Bears. I’ve never heard one person say “I hate bears”. Well maybe you would if you were mauled by one. That would definitely change the perspective. To me they are all amazing. I went to Vancouver, last October and although Squatches were on my mind, I couldn’t wait to see a big bear. It took a while but I did and I was blown away by the sheer strength and size of one.

I know you are wondering why the hell is she writing about bears again right now? Well, I’ll tell you, I wrote this post . Originally because I watched the show Legend Hunter and it was putting forth the theory that the beloved Wisconsin resident terror and unofficial mascot, The Beast of Bray Road himself could be a bear. Granted an awful looking one with mange, but still, a bear.

When I watched it I immediately had a flashback to last winter when The Yeti mystery was supposedly solved by the science community through DNA as a Polar Bear. And now I’m updating it because I recently saw another bear and Bigfoot comparison. Matt Moneymaker posted this recent picture to his Facebook page.

And the debate began. Is it a bear or a bigfoot?

So I thought, this is ridiculous. What similarities could these two have that would make people believe that all the hominid and possibly one Dogman encounter out there all be a bear.

First, I wanted to dig a bit into the past to learn about the evolution of bears . Where did they come from? What were their ancestors like? I had to dig back to about 20 million years ago, give or take, to find the very first ancestors.

“Wherever I wander, wherever I roam…I couldn’t be fond of my big home…”

In their beginning, roughly twenty million years ago, the first bears appeared. They were called the Dawn Bears. They were not the large predators they are now. Because of this they adapted to live mostly up in the treetops. Over time the bears came down and spread out and adapted to wherever they migrated or were landlocked. Here in North America around 200,000 years ago, when the bear was landlocked due to ice between Russia and Alaska melting, they started to evolve into the largest predator here. They were known as the Giant Short Faced Bear. They weighed roughly two thousand pounds and were as tall as 15’ high on their hind legs. They had teeth made to crack bone and slice through skin. The ultimate predator. This bear, brown and standing on hind legs would fit certain Sasquatch encounters. If it were still around that is. To make a long story short, because explaining the bear’s entire evolution would take awhile, bears spread out and adapted to whatever environment they were in. Polar Bear adapted to cold climates, became proficient swimmers and fur became translucent to provide camouflage, North American Brown Bears will eat meat and vegetation. Their teeth adapted to also allow for grinding to be able to eat the vegetation. The Panda Bear grew a thumb to hold onto the bamboo, etc.

If scientists really think all Sasquatch related encounters are bear encounters then this all could help explain the possibility of their theory. The bear looks different in all their different environments as does a Squatch. In the colder climates they are Yeti and white or translucent. Here they are mostly described as black or brown like our bears. Some people think they are descendants or a split from Gigantopithecus. But what if it’s a split from the Giant Short Faced Bear? Both were enormous creatures, both started in trees. Both evolved and adapted to their environments. What if scientists are right? What if they are on to something, some other evolutionary breakthrough. Maybe some are Sasquatch and some are these ancient Bears? Wouldn’t surprise me if this supposed extinct bears were still around.

” when you find out you can live without it and go along not thinking about it, I’ll tell you something true. The bare necessities of life will come to you…”

I’m definitely not saying I believe a Bigfoot is a bear, or a descendant.’. Or that all of you saw a bear in those woods. Or that the Patty video doesn’t say enough, or that the Dogman is a mangy bear. But with scientists putting forward that theory that everything is a bear right now, from the Dogman to the Yeti, along with the bear DNA put forth, we should think about what that possibility would look like, how it could be possible, how the evolution patterns adds up if for no other reason then to defend your claims against them all successfully.

We all say follow the truth no matter where it leads. And sometimes when we do it can be very disappointing because we had been hoping for a completely different outcome. But at least we have the answers. In the case of the picture above I believe it is definitely a bear. Thanks to a breakdown of the picture from Iknowsquatch, you can see it more clearly and know it’s a bear. But that may not always be the case. 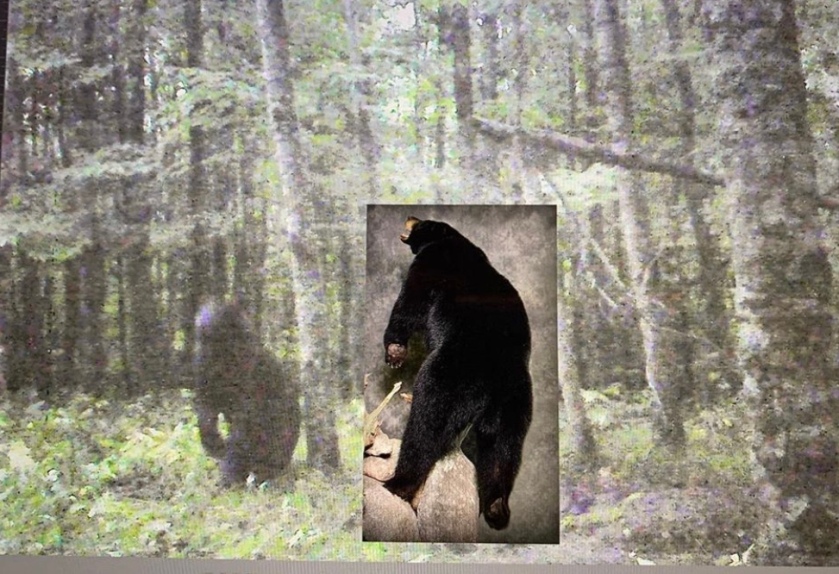 So keep searching for those answers and keep your mind and your ears open. Consider every possibility, weigh every piece of evidence and just like in the song,

” The bare necessities of life will come to you…”

BFRO Bear/Bigfoot breakdown picture from IKnowsquatch Big thank you for sharing it with me.