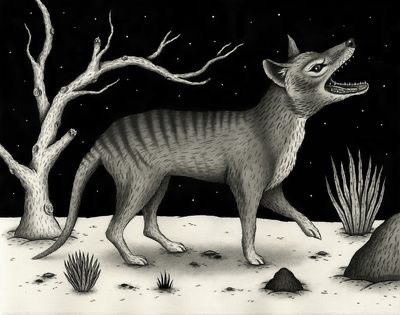 Indonesian officials have posted a reward for anyone who captures a Tasmanian Tiger, a doglike striped animal that zoologists say has been extinct for at least 60 years. While there’s no scientific proof of their existence, news reports this week quoted villagers as saying that packs of Tasmanian Tigers have been killing farm animals in moonlit attacks to feed their pups. The official Antara news agency said officials in the remote mountainous interior of Irian Jaya, the Indonesian-controlled western half of the island of New Guinea, offered $670 for the first Tasmanian Tiger captured alive.

Named after their only known habitat in Tasmania, an island state off southeastern Australia, the animals have dark stripes on their backs. They raise their young in pouches like kangaroos and other Australian marsupials. Hunted mercilessly by European sheep ranchers last century, they were declared extinct when Tasmanian Tiger back on ths prowl Villagers of Irian Jaya, the Indonesian-controlled western half of the island of New Guinea, have reported packs of Tasmanian Tigers killing farm animals. The Tasmanian Tiger, also called the Tasmanian Woff, is a large marsupial native to Tasmania. Scientists believed it’s been extinct for at least 60 years. The Tasmanian is about 5 leet long with light brown fur with dark stripes across its lower back The jaws of a Tasmanian Tiger are believed to open wider than any other mammal. They raised their young in pouches like other marsupials which include the kangaroo, koala, possum, Tasmanian Devil, and wallaby. The last known Tasmanian Tiger died in a zoo in Hobart in 1936. Dozens of unsubstantiated sightings have been made in Tasmania ever since. Now New Guinean villagers claim packs of six or seven Tasmanian Tigers have been killing pigs, cats and other domestic animals during the past month. The Indonesian Observer newspaper said one Tasmanian Tiger was killed recently by villagers and sold to highway workers who ate it for dinner.

Seeing the thylacines last images from that zoo in the 30s is heartbreaking. Knowing we hunted an animal to extinction is almost unbearable. But as much as I hope they are still alive and hiding from humanity, I am very troubled about the idea of bringing them back. Their habitat is not what it once was and there is no guarantee at all they won’t be hunted mercilessly all over again.

They are beautiful creatures, and we should remember them as they were…

One thought on “In the News…The Thylacine”