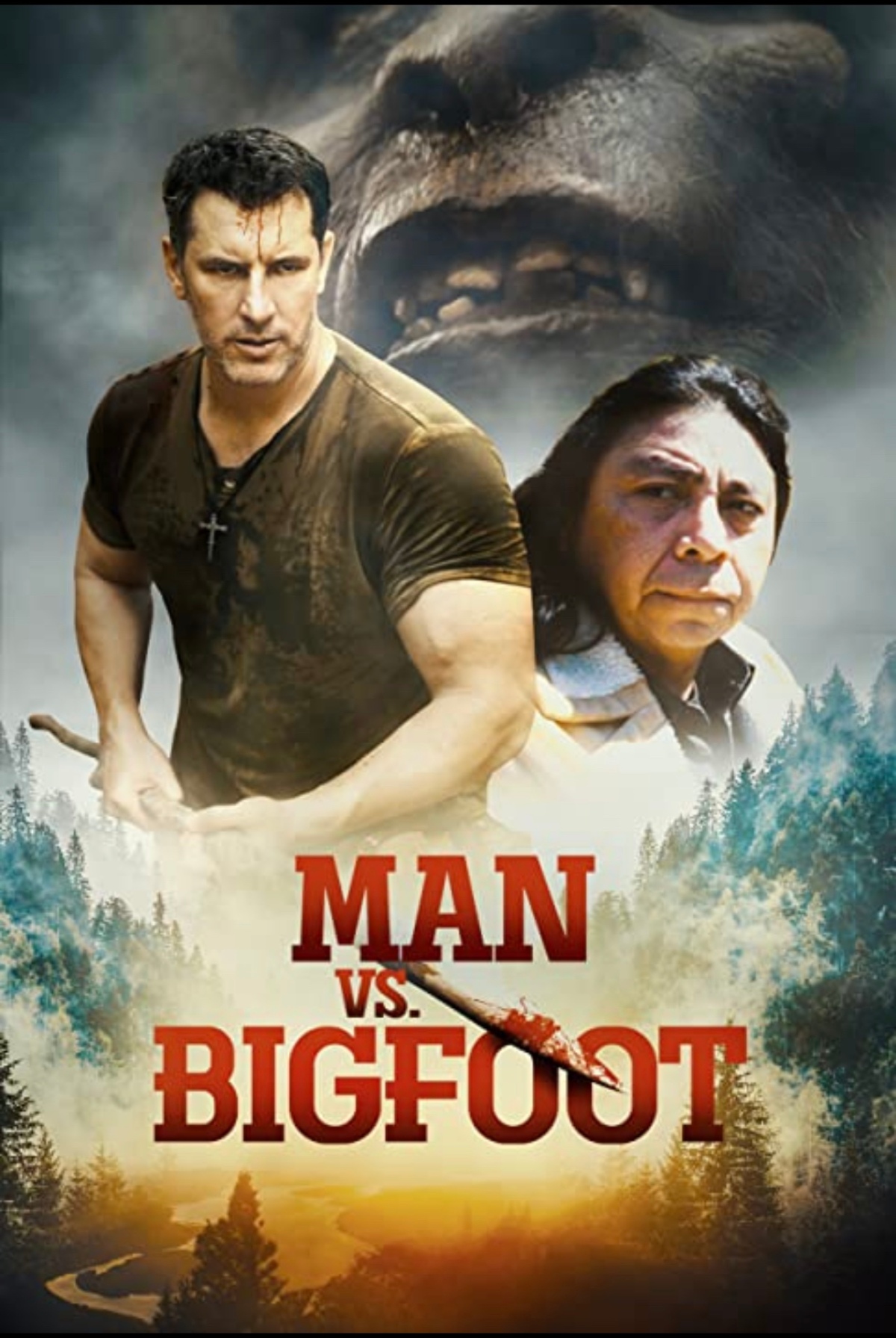 David Ford, the writer, director , producer and star of this picture is not new to Bigfoot. This is his follow up to his previous bigfoot movie, Something in the Woods.

If you haven’t had a chance to see this one yet, I highly recommend it. The movie is centered around a logging foreman and his family who live out near the woods. The family begins to get habitually visited on their property by a bigfoot who has less than friendly intentions…

In his sophomore film, Man vs. Bigfoot (a battle in real life I’m not sure we’d win) starts out with a man heading out for some solo camping. Going solo as some, like myself know, can be scary enough with or without bigfoot lurking about, but he was lurking about and this camper was figuring that out…

After the man doesn’t return home as scheduled the wife calls his brother, Jack Rollins, played by David Ford, who then packs up and heads out to the forest In search of him…

While camping that first night, he started to hear noises in the woods around him, and then a trapper, played by Antonio Tec, came out from the woods to greet him. The trapper is Native American, and he shares some of the history from his tribe about bigfoot. He describes him as being more of a protector of the woods type creature to them.

If you follow along with me you know I love the idea of him being a protector out there, but unfortunately that’s not likely to be the case. And it’s definitely not in this one. (Hey, a girl can dream right?). What ensues after the trapper leaves is a battle between Rollins and the elusive beast himself. Now besides that theory of a protector, there were many things I liked about this movie, the biggest being that most of this epic battle is taking place during the daylight hours. Which means that the suit had to hold up and after a few hiccups and changes it does.

The other things I appreciated was , the scenery. The location of a bigfoot movie is one of the first things I’m noticing. I also liked the fact that the traits and behaviors most cryptozoologist attribute to a bigfoot are being used here such as, using environment to camouflage, using rock for tools, and giving the creature signs of intelligence, which to avoid the human race it must have.

I really enjoyed this film, and in my opinion if you are a bigfoot enthusiast you will definitely appreciate this movie. I reached out to David to ask him a few questions, and here is what he shared with me…

“I got interested in filmmaking in college when I started writing screenplays. It took me about 18 years before I made my first one though. My favorite part of the process is principle photography and actually shooting the film. I enjoy it all but I particularly like watching it all come together on camera. I did know many of the actors but also held auditions. Covid only interrupted the post production aspect of it. We had already filmed the movie when Covid hit. I chose Bigfoot because of personal experiences and because I needed a big star and couldn’t afford a known actor. Everybody knows who Bigfoot is. I am a believer because of experience in the field as well as other personal experiences that pertained to a rock being thrown at me in a remote area with fellow researchers. I even caught some audio of the creature back in 2013. We had many issues with the suit. The suit that I ordered was not what I got. I would like to keep that part out of it, but I will say Keith Lack stepped in and saved the day with the creation of the mask and baby bigfoot (spoiler). I worked with Jeff Stewart closely on the project as he was my AD primarily and practical effects supervisor, amongst also playing a role in the film. He advised me in the film. We will be showing the film at the Texas Bigfoot Conference in Jefferson in October from my understanding. I don’t plan to make another bigfoot film as I am moving on to other types of films such as faith based and thrillers. Finding private investors is not easy though so if anyone wants to invest in one of my future films they are free to reach out. If anyone decides to watch the film on VOD please leave us a rating as each rating and review helps the film tremendously. Thank you…”

Follow along with David’s upcoming film The Preacher Man here:

Link to watch Man VS. Bigfoot on Amazon:

Link to watch Something in the Woods:

If you’d like to help in the funding for David’s upcoming inspirational and faith based film, you can reach him at: