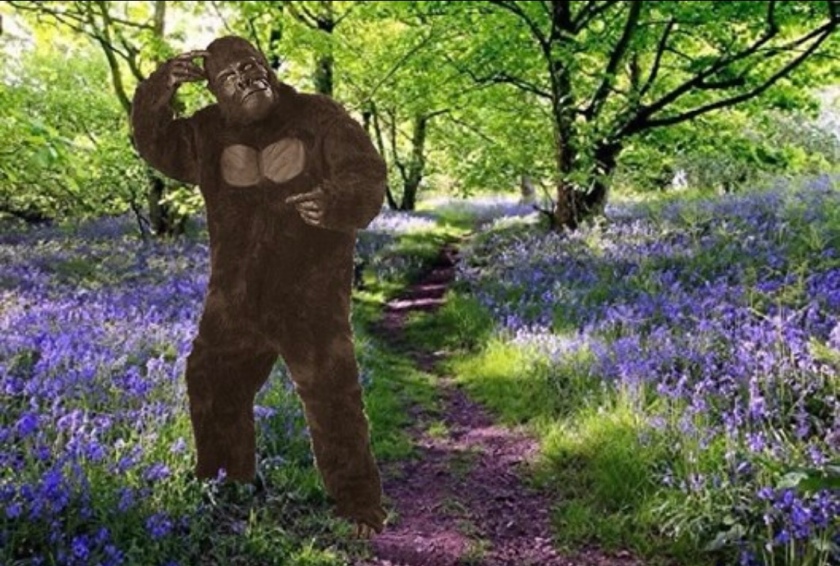 While I’m walking around in the forests this spring I’ve noticed that the pollen and other possible allergen counts have been unusually high this year, poison ivy is literally growing like the weed it is. I’m itching, scratching and swatting at the wonderful insect welcoming committee that greet me the second I get a toe in the woods. Many people claim some birds are lookouts for Bigfoot. But I personally think mosquitoes are on his payroll.

So.. while I’ve been sneezing and scratching my way through the forest waiting for my fellow hikers to kick me out of the woods. (Sneezing is a criminal offense in some states right now…) I’m wondering what about the big guy. If I’m scratching, what about him? Is he allergic to anything? Are the insects swarming him. I mean he is said to have a wonderful odor, so does that draw a lot of flies?

If he is more primate than man are primates allergic to anything? Right now, here in New England poison ivy has been growing out of control, I’ve never seen it like this. I’ve had it twice looking for him so it’s only fair If he is out there somewhere scratching too.

I found a few allergies around the animal kingdom primates and other animals are allergic theobromine (chocolate) cocoa. So if you’re putting out chocolate for your squatches you may want to rethink that. Figs, are a primate favorite, I would leave some of them around your research area. I read nothing that said that primates or other animals were allergic to poison ivy. Goats actually love snacking on it! I can’t even look at it. It can however get on animals fur/hair and then if we touch them…boom, you’ll be scratching your night away. So I guess it comes down to DNA. Are they more human or primate? And without being able to hit urgent care what would they do if they got sick?

Jane Goodall observed primates in the wild using stone tools to dig for different food source and medicinal herbs. Clay is also used to coat there belly and absorb poisons and other foods that may bother their digestion. And no matter what your belief of his DNA, he is most likely capable of using stone tools and doing the same. He would, we assume, know his environment , he would most likely know what plant may help with what ailment.

Both human and animal alike are capable of having allergies such as hay fever or other typical allergens. I know as much as I’d like to see one In person, I’m hoping not during an allergy attack. That’s got to be something to see, can you picture him sneezing away.

Well I appreciate you stuck with me for this one. I admit silly things pop into my head, but at the same time it is a subject worth discussing. We look for Bigfoot dung, so allergies is nothing for you guys.

What do you think? What kind of allergies would you think he may susceptible to?

I have a few allergies myself so I’m always masked up. Catching a virus and having allergies can’t be good. If you start coughing people will run you out of town. With pitchforks…Beware of the hikers…

I thank Jay Bachochin, for creating the silly pictures I needed for this blog post.

You can learn about his Bigfoot research here…

2 thoughts on “Allergic to Bigfoot…”