What are the people in the neighborhood… 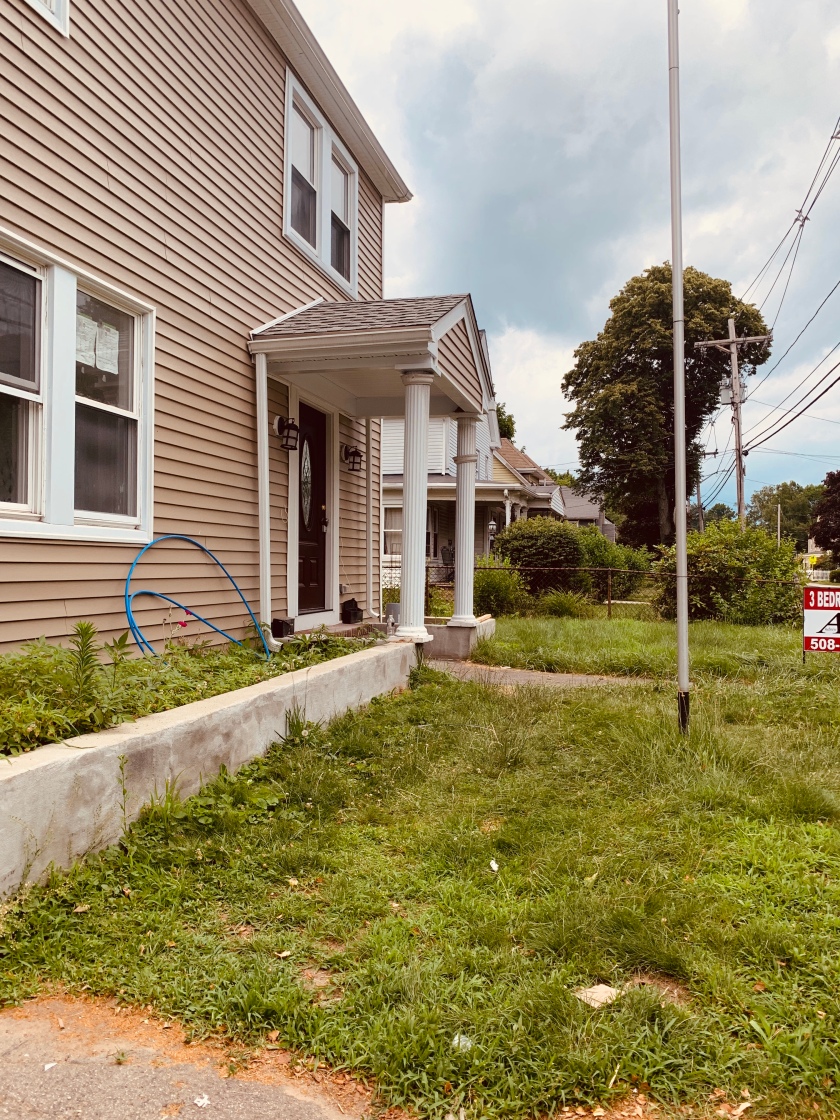 I was a baby when we moved into the neighborhood so I can’t tell you anything about moving day. I do know the house started out as a brown shingled one though. I only knew three neighbors when I was very young. Well, three and the local priest. See, we lived next to a church. St. Mary’s church. I remember it being very ominous to me when I was young. I had many nightmares about that church. My sisters did too. My nightmares were either end of the world types with the church’s bell tower coming down on us, or about aliens invading. In the dream I’d look out the window and see their ship above the church. Nightmares, I had them almost every night. I didn’t know what was worse. Sleeping or being the only one awake at night in the house. The priest was very kind and patient with me. I would ask all kinds of questions about life and death and he would do the best he could answering them while I ate all his cookies.

I also lived next to a professional puppeteer who taught us how to make paper mache puppet heads. I mention this because as if it wasn’t bad enough being scared of my home, being scared outside by them was too much. Every Halloween the puppeteer donned a witch’s costume, stood on stilts, and scared the neighbors. I knew it was her. I did. But all the same she still scared me off.

The only light in this deal for me was when I hit my tweens. Someone new bought the house across the street. That light would be the boy next door. My best friend still to this day. We survived puberty as friends, if you can do that together as a boy/girl friend mix, you can do anything.

I loved escaping to his house, no worries and fears, or so I thought, but as it turned out the whole neighborhood had gone to the ghosts. But I’m going to let him tell this tale, because it made him a true believer, from just believing me to knowing it’s true isn’t easy. I wouldn’t wish it on anyone, but lord I needed one friend who did…

Jay’s house as of a week ago. Abandoned because no one stays living there either.

As I said, I’ll let Jay tell it in his own words:

“I remember it being a nice summer night. We were in my pool as usual and no one else was home. While splashing around in the pool we happened to look up into the second floor window and saw a women in the window.

It was not a woman we recognized. She scared us so bad we jumped out of the pool running across the street to her house soaking wet looking for safety. After talking to my mother she mentioned she had seen some strange things in the house as well but was keeping it to herself.”

I asked him what the one thing about my house that scared him the most was, here was his thoughts…

“I had a best friend who lived across the street in an old house like mine. To get to her door I had to pass the stairway to the basement every time. All the time I had this eerie feeling anytime I passed. Sometimes the feelings were stronger, I remember often it was stronger at night. You just felt like something was waiting to grab you on your way passed the entrance”

What little research we could find on his home did say that someone had fallen down the stairs and died from a broken neck.

I Aint Scared Of no ghost…

There were other neighbors as well that reported strange activity in their home. The house to our left had come up for rent and my father’s best friend at the time was looking to rent it. Although my dad was not a believer, he let his friend know what everyone else believed. His friend didn’t believe in them either. He and his son lasted one month. They heard doors, windows and drawers opening and closing all night, voices, and odd sounds. My father’s friend made sure he let my dad know on his way out that it was true. It was all true.

Everyone on the street seemed to have one common scare. They would hear someone or something running up and down the stairs at all hours and jiggling the old doorknobs trying to get into the house. And no one was ever there. Ever. And how did I know this was happening to all of them?

Who you gonna call….

My mom was the only stay at home mom on the block at that time so they would call her scared out of their wits that someone was trying to break in. I remember she used to grab the broom and head on down the road. The broom was just a prop really, she knew who (or what) was in their house and they weren’t trying to break in because they already were in and they weren’t going anywhere. But these particular friends were not believers yet. They would be, eventually…

My BFF, no, my brother, son to my parents, uncle and godfather to niece and nephew and my best thing…love you Jay, thanks for doing this when I know you hate writing lol.