When you listen to a lot of Bigfoot encounters as most of us enthusiasts do, you run into the subject of Bigfoot being referred to as an interdimensional being from time to time. Some people call it the “woo” theory. The “woo” belief is that Bigfoot travels back and forth between parallel dimensions. The interdimensional hypothesis was originally started by ufologists. It was a more plausible way for them to explain how ufos could appear and disappear right out of our sight so quickly, and because interstellar space travel would take generations to complete any one way. 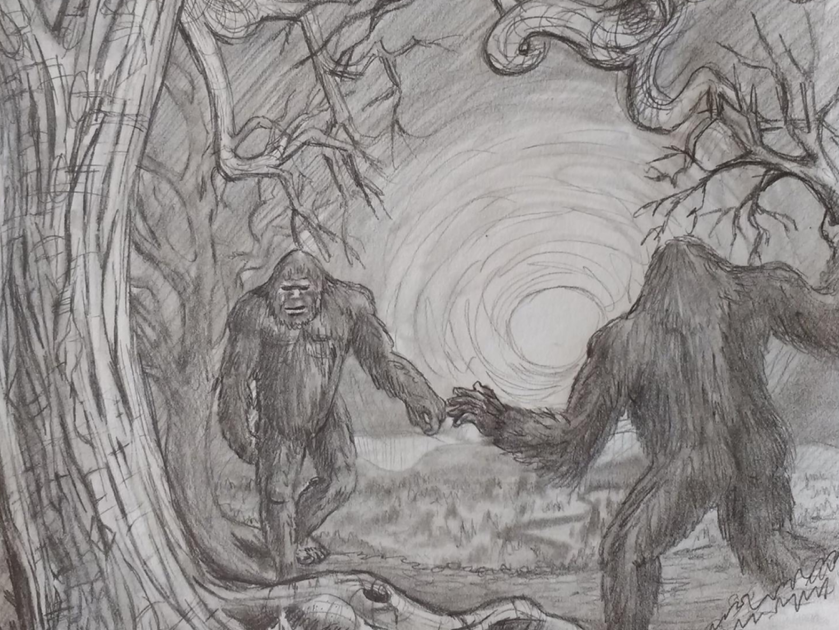 Many enthusiasts and researchers don’t recognize this theory, some Cryptid social media sites won’t even allow you to talk about it on their page. I understand this. They are of the belief of blood and bones. A possible species of primate yet undiscovered. This is my belief as well, but I have learned to keep an open mind. I have definitely seen some things that just can’t be explained.

I recently watched an excerpt from an up and coming documentary titled Finding Jay. The video showed the parting of two large branches in an unnatural way, with seemingly nothing around to cause it. After hearing knocks and having rocks thrown near him around the same site, it seemed likely it could be a Bigfoot. But where was he? How could he have done that without being seen? How could he even get from one place to another without being noticed. This type of situation is the reason people sometimes think there is more going on than flesh and blood. But what?

Is there a possibility that being as old and in touch with nature as they may be, that they could potentially manipulate their surroundings in such as way as to blend into nature like a chameleon? Or be stealth like the creature from the Predator movies?

I often wonder about the secrets of the forests and the earth they may hold. If there is a mystical energy around us out there. What truly makes us feel so relaxed when we are hiking along. We sometimes use the expression , getting in touch with nature.

But what if it means more than we think it does, and we just have to be open to accept what exactly that is.

A parallel or a mystical universe…

Clip from above mentioned documentary Finding Jay (May 2019 release date)

Photo one from google stock

And Bigfoot sketch by Shirley McDaniel