It’s a Saturday morning and I’m having my coffee while I decide where my next adventure will take me. If you are following this blog, first, thank you again, and second, you know I’m following a pathway I believe is a possible Bigfoot stomping ground. So I am visiting parks, woods, properties (with permission) etc that correlate to this possible bigfoot green corridor. And on occasion while out on that search it takes me to places also steeped with interesting history. This is one of those places. Here’s some history of the Mendon Town Forest, in Mendon Massachusetts.

The Mendon Town Forest is one the most recent trail systems in the Blackstone Valley. This was once the home of the Nipmuc Indians. I should mention, Nipmuc is a name for the region the Native Americans lived in, not a specific tribe. It’s actual meaning is, “people of the fresh water” . In the beginning when the settlers arrived they lived peacefully alongside each other.

The Massachusetts Bay Colony settlers purchased roughly 8 miles of the Nipmuc’s forest. It was named the Squinshepauke Plantation. Then in 1667 it became the town of Mendon. In 1675, these settlers became the first casualties in Massachusetts in what was to be named King Phillips War. The town was burned to the ground by the native Americans, only to be rebuilt in 1680. The last known genuine Native American was named Caleb. He was recorded in the town history as being the last Native paid a bounty for hunting the wolves of the area. This was recorded around 1669. The highest position in the Mendon Town Forest is named Wigwam Hill after him. He was said to have his home (wigwam, on the top of the hill). It was thought that Native Americans often settled on hilltops to communicate with each by smoke, without view obstructions.

The first person to settle on Wigwam hill was Woodland Thompson. And the first Family to settle in the forest, was the Taft family. I was luckily able to find the Taft trail out there that marked his land. 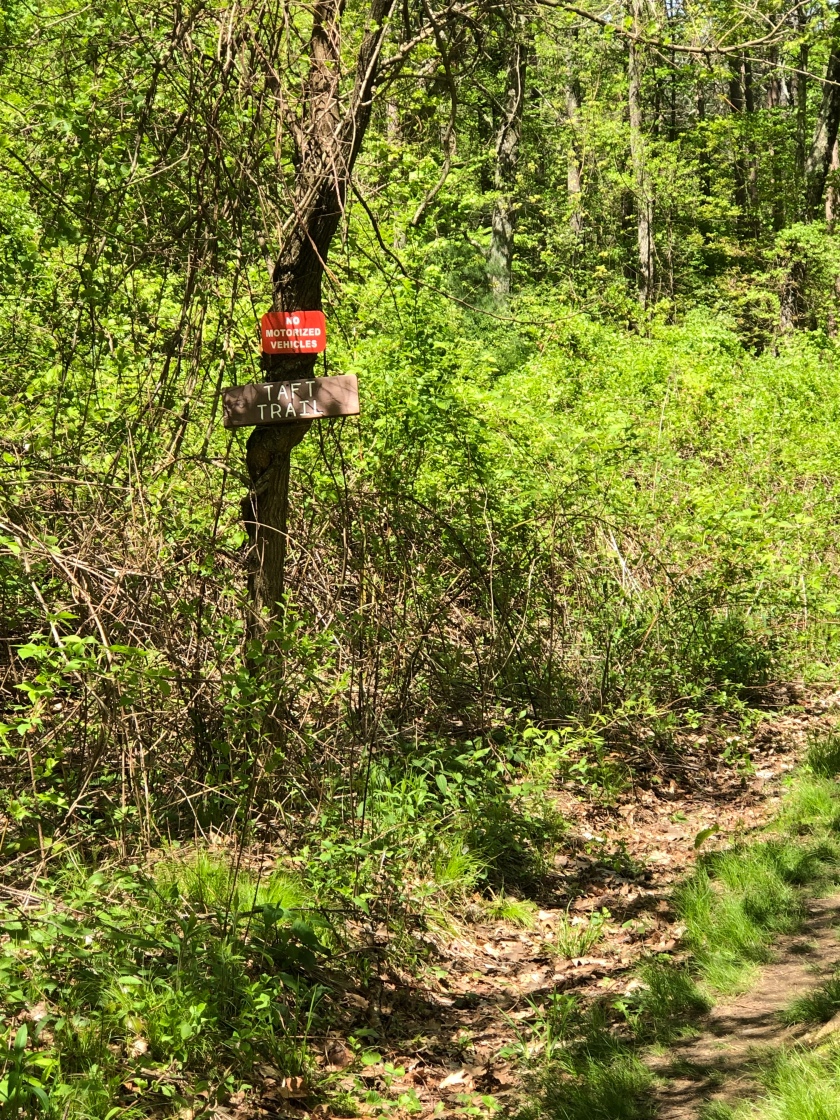 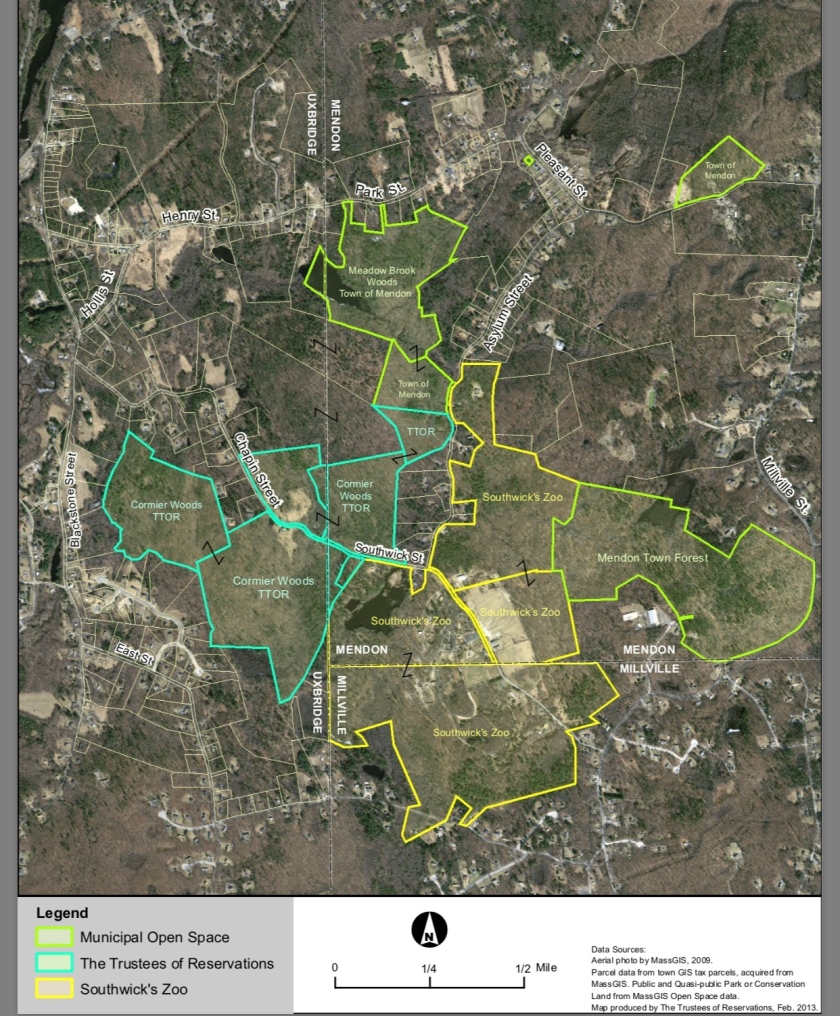 Trails of Mendon Town Forest from the town website

While you are walking down the Taft trail you will actually see some remnants of his farmhouse and the stone walls that surrounded his property.

While going through the trail systems, I was a able to pass through all kinds of history, not just the typically seen stone walls, but parts of an old mill. The first mill to ever use the Blackstone River to power itself. There were old bridges, parts of what I was sure was a stone fireplace etc. I found myself sitting on one of those said rock walls to ponder what life for them must have been like. They always say history repeats itself, I really wish it would. To go back to when all the land was green and beautiful and everyone worked together to survive would be a wonderful experience. 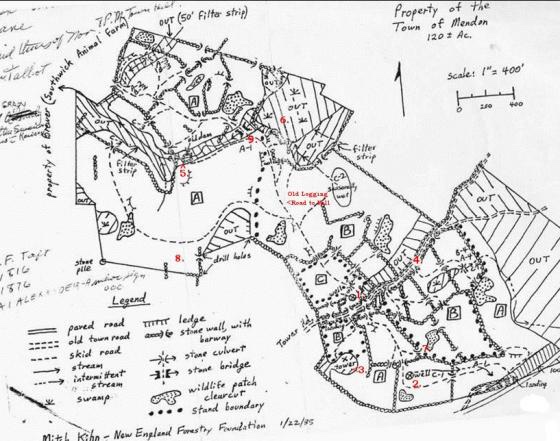 Archeological map of the forest

There are a lot of side trails and loops in this forest. Very thick vegetation easily able to get turned around, I definitely advise taking or downloading a trail map to take with you on your adventure. And bug spray, lots of bug spray….because on this trip, the gnats were out and ready, I was completely engulfed by them.

Lastly, we’ve heard the stories, and seen the paintings that depicts the Native Americans and Bigfoot co-existing. Did that happen here as well? Is the reason I feel so strongly that I need to investigate this area, (and that I found yet another footprint inside the area), be because he did co-exist here with them? Does he/they still remain because of Mendon’s and surrounding towns still undeveloped land? Is he still taking advantage of this possible “green corridor” to migrate to warmer climates for the winter? 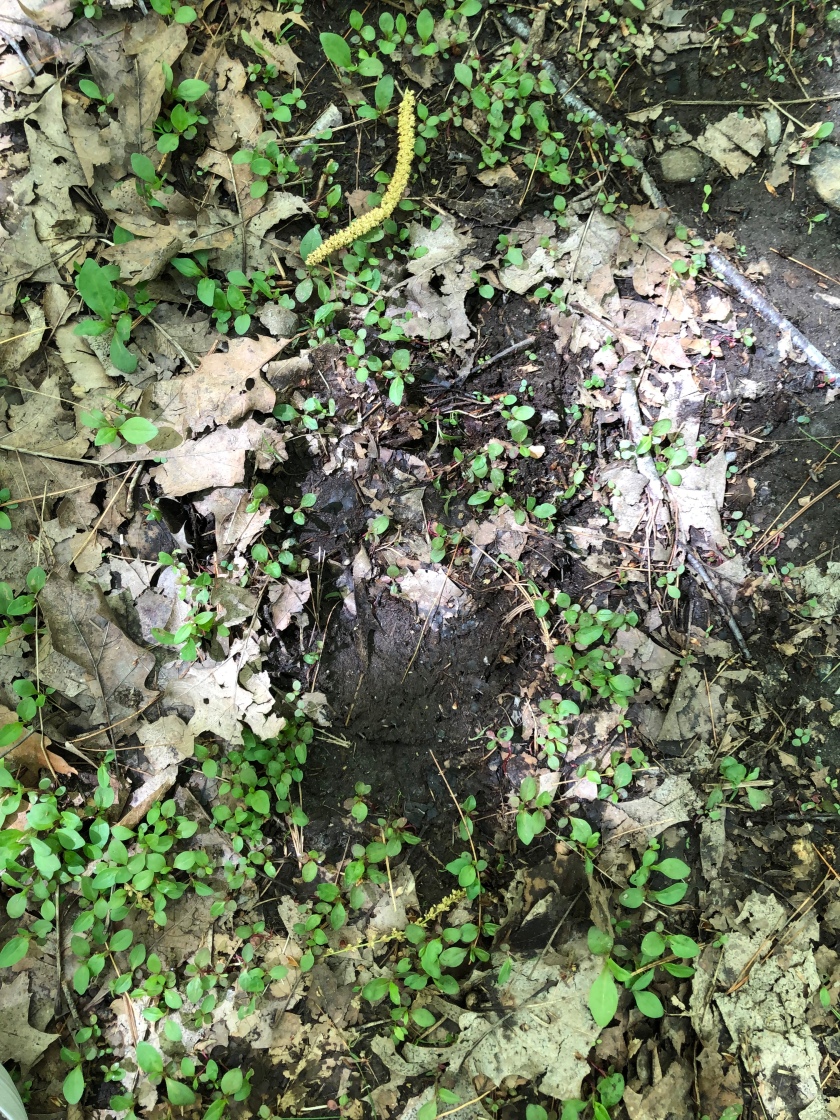 Hopefully I’ll be able to answer these and other questions someday soon. But for now, I’ll just enjoy another walk through history…with or without the hairy man.

Video from my trip in the forest:

All photos and videos are my own, with the exception of the Town of Mendon maps. My pictures and this post is copyrighted © May, 2019 property of Sasysquatchgirl and Bigfootmountain all rights reserved.

Thank you to the town of Mendon for hosting me.

One thought on “A Walk Through History…Mendon Town Forest 🌳”